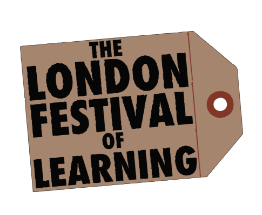 At the recent London Festival of Learning there was so much to absorb and think about that I am still digesting what I heard in conference sessions, what was tossed around in conversations with colleagues and in new readings I have done since the festival closed. I want to share a number of these ideas in a series of posts over the next couple of months. One session that struck a chord with me early in the week was the idea of children making Artificial Intelligence (AI) or more specifically humans teaching machines* and what that could mean in the context of education in schools**. 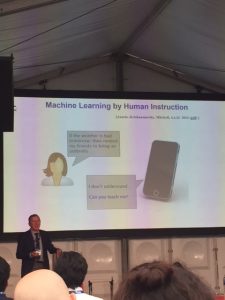 Professor Tom Mitchell gave a keynote address on Wednesday 27 June festival titled: “What if people taught computers?” *** He is an American computer scientist and E. Fredkin University Professor at the Carnegie Mellon University.

In his talk Professor Mitchell switched the tables on the idea of computers teaching people to one of people teaching computers. His reasoning is: “we might discover something interesting about instructional strategies by building computers that can be taught” and secondly, “if people could teach computers in the same way that we teach one another”, then all at once “everyone would be able to program”.

In thinking about the second  idea it occurred to me that could this be another way to teach computational thinking in schools? Fascinating possibility. There may be schools and universities in Australia and in other countries already doing this?

In labs at Carnegie Mellon University Professor Mitchell and his team of graduate students are conducting ongoing research on machine learning by verbal instruction and demonstration. He revealed to the audience a prototype LIA (Learning by Instruction Agent) that allows people to teach their mobile devices by verbal instruction to perform new actions. Here, one verbal command that the system does not understand allows the user to teach it by breaking the procedure down into a sequence of simple, more understandable steps. Here the research goal is: “to be able to teach the agent anything in its sensor effector closure”.

No doubt you may have seen the clip where a reservation is made by a machine and the end user is unaware that it is not a real person answering the phone. Other examples of different kinds of conditions (or concepts) Professor Mitchell shared during his address were: “teaching the machine conditional strategies ie

if it snows at night … set my alarm 30 minutes earlier so I don’t miss my flight” and “if somebody sends me a picture containing my mum, email it to her” and a final one: “if I get an email from my project team then forward it to my assistant”.

Watch the video of a human instructing a machine how to send an email here.

Implications of his research for humans teaching machines place a spotlight on and I quote:

In our conversation afterwards Professor Mitchell said he had “never thought about children teaching machines being a possibility for school aged students”. This might, on the one hand be pure fantasy because there are so many important aspects of K-12 education that are a priority, but embracing the idea as a way to learn how to program in STEM education might be an exciting lever?

*There was an article in The Conversation late last year that touched on teaching machines to teach themselves.

**The direct quotes in this post are from slides and notes taken during the keynote and from the festival program.

***Links to books/papers/videos published by Professor Mitchell are here.

Young people in schools learning how to teach machines: Fantasy or a possibility?